My kaddish journey of 11 months has begun with a trip to Boston and SGH for a meeting on the AMP hydro projects. As expected what would typically have been a one day, in and out, first flight- last flight trip now has to be a two day trip so that I can make mincha maariv, shachris and mincha maariv again. When the meeting was scheduled I started investigating my flight and minyan options and quickly determined that two days were required to make it all happen. So I called Charlie Russo at SGH to get a lay of the land in terms of Boston geography so that I could figure out where I to daven , where to stay, how to get from here to there and set my meeting times, as well. Much to my surprise Charlie invited me to stay in his house and have his assistant Robin work with me to find a shul. Robin called and started the process. She quickly determined there was a Chabad a few minutes from Charlie’s house. She called Rabbi Yossie Lipsker who said that he would arrange a mincha maariv minyan for me for Monday evening and indicated that there is a regular shachris minyan at 630am. Charlie said he would pick me up at the airport, take me to his house, take me to shul and then take me to the meeting. Wow!

To my surprise early Friday morning I got a call on my cell from Rabbi Lipsker who introduced himself as the Chabad Rabbi of the Chabad of the North Shore. He was called by Robin and was calling to let me know that he was arranging a mincha maariv minyan for me at 8pm on Monday evening and that the regular shachris minyan would be at 630am Tuesday morning. He asked me if I had arranged food. I told him that I had not yet even thought about food. “No worry” he said, he will have food for me which I can either eat with him or take with me! Amazing!

I arrived at 630pm Monday evening at Logan. Charlie was waiting for me and off we went to his house. His parents were visiting from Florida . We sat and chatted while they, Charlie and Mary Ellen eat dinner. At 745pm Charlie drove me to Chabad, a 15 minute drive. He went to window shop while I went to daven. As we were waiting for the minyan to gather in walked a gentleman who I recognized as Dovid’s uncle! He recognized me as well. What a small world. He told me that Rabbi Lipsker is a distant relative of my mechutan Paul Volosov. I then met Rabbi Lipsker, a very warm, somewhat “hip” Chabad shaliach (he rides a motorcycle). He has been in Boston for over 40 years. He grew up in North Phili with Rabbi Levi Shemtov. After Maariv he gave me dinner to take with me.

On Tuesday morning Charlie took me at 6am to shul and I davened at the 630am minyan. About 20 men were there including another Lubavitcher shaliach. After davening Rabbi Lipsker had hot coffee and breakfast waiting for me in the shul lobby. To show my appreciation I gave him a copy of the Klausenberger Rebbe and a check for the shul. He was most appreciative though made a point of saying neither was necessary. Charlie picked me up and we were off to our meeting at SGH.

What an incredible way to start my post sholshim kaddish experience. 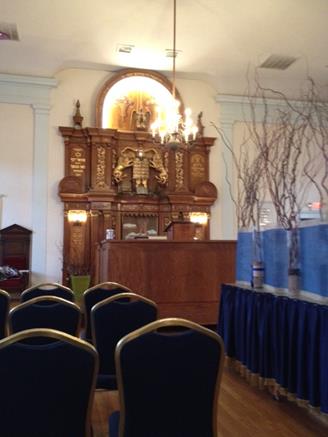