On the road again returning to Silver Spring from Saint Louis; actually Chesterfield, a STL suburb where my daughter and her family lives. While there I davened in a shul known as TICK, a pneumonic for Tpheris Israel Chevrah Kadisha Congregation. It is a small, very warm, closely knit community which in addition to the shul hosts the Missouri Torah Institute, a Chofetz Chaim Yeshiva affiliate.

Because Friday was a legal holiday, Shachris at TICK was scheduled for 8 am. As I was leaving my daughter’s house, at about 7:40 am, she mentioned that I was probably leaving too early because the 8 am start time was “TICK time”. I left for shul any way since as an aveil there is always a high likelihood that I will be asked to be the chazzan in which case I need to be “ready to go” at the minyan’s start time. When I arrived at the shul, at about 7:50 am, the shul was locked. No one was in sight. TICK time, indeed! A few minutes later someone arrived and opened the shul. I went into the beis medrash and began to put on my talis and teffilin. Men started to trickle in. I was asked to be the chazzan and when I started berachos, after the official 8 am start time, we were short a minyan. When we reached the first kaddish ten men had arrived. This same scenario repeated itself throughout Shabbos and Sunday morning. Every minyan began on “TICK time”.

“TICK time” made me focus on a more serious point. The Talmud relates that Chassidim Harishonim, scholars of the earlier generations, prior to commencing their prayers would prepare mentally and emotionally for an hour and only then commence their prayers. The lesson is an obvious one: prayer before the Almighty requires focus and preparation. One should not rush into a conversation with the Creator as if it were a casual conversation with a friend. Davening requires focus, thought and concentration.

Lest anyone think that this is an abandoned custom of old, I recall Rabbi Julius Hyatt ob”m who would regularly daven at the 7:30 am minyan in my shul, Young Israel Shomrei Emunah in Silver Spring, Maryland. He would arrive, however, an hour or so earlier to prepare to daven.

Truth be told it is only over the last few weeks, since I have become an aveil, that I have made a conscious effort to arrange my early morning schedule so that that I arrive at shul sufficiently in advance of the minyan’s start time. This has enabled me to don my talis and teffilin thoughtfully before the start of the minyan and to think about what I am about to do. I am only talking about ten or fifteen minutes – not the hour of the Chassidim Harishonim or Rabbi Hyatt z”l. But for me it is about not just coming to minyan, something I have regularly done for a very long time, but rather, trying to make the davening experience more meaningful.

Another “benefit” of my aveilus. Another lesson to be learned and sustained post aveilus. 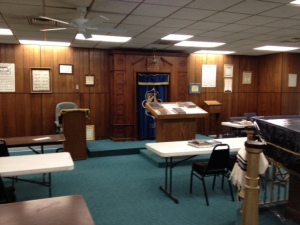