My twenty four hour stay in San Francisco can be summarized in a single word – Chabad. Chabad made it happen for me. In unusual locations Chabad conducts both a regular shachris minyan and a regular mincha minyan in downtown San Francisco. Without these unusual minyanim I would never have been able to say kaddish.

Every weekday a young Chabad rabbi conducts a shachris minyan in a movie/art production facility located in the San Francisco Chronicle building at 925 Mission Street. The minyan I was advised is “99% reliable”. Its core participants are Russian men with a smattering of other locals and visitors. Shachris ends with tehilim, first in Russian then in Hebrew, and a mishna. That was particularly useful for me as they say kaddish after each – thereby giving me two extra, “insurance” kaddish recitations.

At the end of the davening the young Chabad rabbi announced that there would be a minyan for mincha at 3:30pm in Sacremento Alley near 1 Market Street. Great! If my meeting in Hayward ended early enough I could drive back to San Francisco in time to not only make my 4 pm meeting at PGE but first daven mincha at the Sacremento Alley minyan. These logistics were in fact critical because the only other mincha/maariv minyan possiblity was in the Richmond area at 5pm. That minyan would be impossible for me to attend because my 4pm meeting at PGE would not end in time for me to drive the haf hour to get to the Richmond area.

As things turned out the Almighty was looking out for me. My meeting in Hayward ended at about 1pm; plenty of time for me to get back to downtown San Fransisco. When I googled Sacremento Alley I found out that it was literally one block away from PGE’s offices. How lucky could I get! I drove back to San Francisco, parked my car and set out to find Sacremento Alley. Sacremento Alley is an outdoor shopping arcade next to the Hyatt hotel. At 3 pm I went to the appointed location and waited. As 3:30pm neared men began to converge at a table and chairs in the arcade; some in yarmulkas, others in hats and others heads uncovered. At 3:30 pm a Chabadnick appeared with siddurim and tefilin in hand and arranged the minyan. There we stood in the middile of this acrade, davened mincha, learned a mishna and said kaddish. 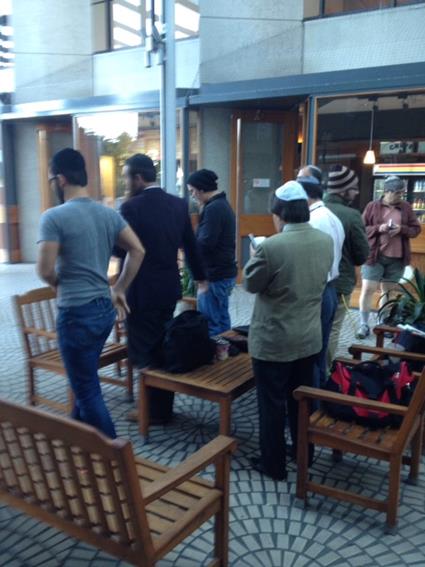 While I was unable to find a minyan for maariv I was able once again to recite an extra kaddish after learning the mishna. The minyan concluded and I walked the one block to my meeting where I arrived with ten minuted to spare.

I red-eyed back home; drove home, showered and went to the 8:30 minyan to daven and start another day of saying kaddish.