My first week post “saying kaddish” presented me with my first post “saying kaddish” travel – to Boca Raton Florida. My several days at the ABA meeting in Boca demonstrated to me that being obligated to recite kaddish made my choices so much easier. During the eleven months of saying kaddish there was never a question, never a doubt. Whatever it took that’s what I had to do. Find the synagogue, rent a car, skip a meeting, go a day early, come back a day later – whatever I needed to do to fulfill my obligation that is what I had to do.

Now my obligation to say kaddish has ended and my obligation to daven with a minyan is the “standard one”. I am quickly finding that the planning, choices and effort required to daven three times a day in a minyan while on the road have suddenly become more “difficult” for me than they were just a week ago. And so in Boca I struggled a bit.

On my first night in Boca I missed mincha for a speaker’s dinner – something I would not not have done over the last eleven months – but left early to make a 9:30 pm maariv at the Boca Raton Synagogue. 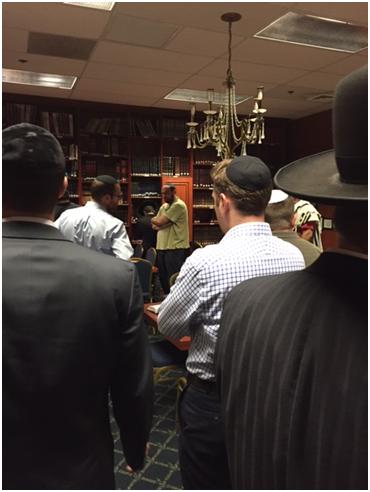 I was surprised to find that the Boca Raton Synagogue is a very large shul on a beautiful campus housing a school and other facilities including a mikvah. It has many minyanim every day; both Ashkenazi and Sephardi. The next morning I attended a 7 am shachris minyan in the main sanctuary.

where I also davened vasikin on Friday morning.

Marilyn joined me late Thursday night in Boca and after I spoke at the ABA on Friday we drove to Miami for Shabbos. On Friday night we walked to Tower 41 where we were eating and I davened in the shul in that building.

Shabbos day I davened in a “shtibel” in the Carriage Club. It reminded me of the shtiblech my father would take me to as a child. I sat in the last row of this small room full of retirees and elderly men speaking in Yiddish and heavily accented English. Sitting at the table in front of me was a younger modern looking fellow saying kaddish. He was visiting from Englewood and while this type of shul was clearly not his first choice he did what he had to do to say kaddish.

Just a week ago I was in exactly the same situation – but no longer. Now I am in limbo – I am an aveil for three more weeks; but a mourner with no voice and no outlet to express my feelings. Now there is silence. I can only “say” kaddish in my thoughts.